This post was originally posted on 2/01/2018 as the first of three guest posts on the PainAsPleasure blog by BibulousOne.  He saw something and encouraged melody to write.  From those small beginnings I’ve graduated to running my own blog.

The post can be found at MELODY’s STORY, PART 1 – Submission but is reproduced here in it’s entirety.

However, I come to that place through my masochism; Melody comes to that place through her need for submission. I thought it would be interesting to understand the difference between those two viewpoints so I offered her the chance to write a guest post and now plan a series of three posts over the start of the year. I hope you find this very different view point as interesting as I did.

I’d followed BibulousOne and his writings for a while. Though I do admit to finding him through following Mistress Elita.

What broke the ice between us was an amazing post titled “BIG BOYS DON’T” .  I remember the build up to this in coded tweets between BibulousOne and Mistress Elita.  I knew something very significant had happened when Mistress Elita tweeted just two words – “Man Down”.  Previous blog posts had highlighted some familiar motivations, this one encapsulated and embodied many things that are at the core of my kink ego.

BibulousOne and myself may come at this from very different angles but at the core, where the emotions and drivers are purely elemental he can describe almost exactly how I feel in similar circumstances.

There’s another brilliant post on his blog called  “SUBMISSIVE/MASOCHIST – they’re not the same” .  His blog is an exploration from the masochistic viewpoint; this post hopefully adds some perspective from a male submissive.  What are the submissive drivers that lead me to know the same elemental space as a masochist ?

To provide some context and avoid confusion, as my kink name implies I am, if not transgendered, at least fluid somewhere on that spectrum. The emotions of submission discussed in this post are entirely gender neutral.  However, it was written by “Melody”, hence the feminine pronouns in the intro.

Apologies in that I’m going to have to use loosely defined labels. There are a myriad of nuances and I’ll happily discuss if people get in touch. 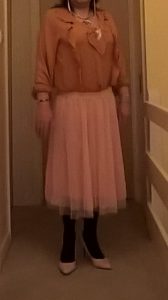 There are three broad categories that make up a submissive persona

This post is primarily about the first one, the other two can be topics for further posts and will touch on what’s behind that strange picture of a supposedly male submissive.

My personal version of submission is an intense need to submit to a single domme. It is a relationship, not an encounter.  It is a positive, mutually enforcing and respecting, living thing that includes the 99% of the time that does not involve kink.

This is a hard place to get to. Once you find a domme who is interested enough in you to explore the possibilities you enter a courtship where she holds most of the cards.  She can play very hard on the desire to submit (let’s face it, she’s already won here) and it’s very easy to enter the realms of infatuation.  Mild infatuation is good, beyond that, not so good and potentially dangerous. 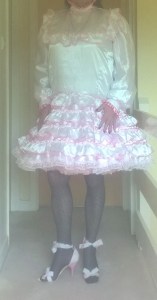 The mind is the largest erogenous zone in the human body. In my version of submission as trust grows she starts to peel away the layers in my head until I’m totally transparent.  She knows the deepest darkest recesses and even knows things I consciously don’t.  I cannot hide behind lies or excuses.  Total honesty is scary, it makes you feel vulnerable and is yet another element in learning to trust.  I intend to explore this in another post.

Always it’s communication, it’s the build-up of trust. To know you’re safe and protected by this person.

This is not a one-way street. Just because you are a “submissive” doesn’t mean you have no say or input.  I can be very obstreperous if someone thinks I’m a doormat.  I’ve never got on with a domme who has no respect and doesn’t recognise a high duty of care for a submissive.

Whether it’s the need to submit or partly driven by infatuation there’s always a nagging voice to give more, be it of yourself or materially. Even minor exchanges trigger adrenaline and dopamine rushes in the submissive.  As an aside, if you ever wonder about the ‘FinDomme’ phenomena, that’s largely how it works.

I spent many years as the personal submissive to a lifestyle domme. The submissive desire to give, in the right hands, provides opportunities to be pushed, mentally and physically.  When your natural desire is to curl up and hide, the desire to give to this person and your trust in them provide the stepping stones to addressing new limits and vistas.

With my kind of submission, it took many years before being able, or even wanting to transfer that submissive intensity to someone else. In this case a pro domme.  There are, naturally, some differences, largely in where the personal boundaries are.  Yes, I am a client and so long as I remember that everything else about my submission to her is as intense as I could hope for.

This domme is well known and has a reputation for application of pain and pushing limits. I am not a masochist, I can’t inflict more than mild discomfort on myself.  It’s something to do with paying the price for the need to submit which finds me entering her chambers accepting I might be pushed to the very edge of sanity by her canes.

It’s the deepest level of trust that tells me that she will cause intense pain, but she will never hurt me. It’s the trust that she understands me so well that she can stop the moment she’s extracted the last ounce of everything I have to give.  I have to trust, I have to endure.  This is not a challenge to the domme, it is a challenge to my core identity that as every ounce of rationality is stripped away I go so deeply inside my core that there’s nothing left. That point where you’re convinced that you can’t take any more and the little voice in the head says – well, maybe one more.  It’s always one more!!  The inner core can’t admit it is at the limit because that’s a rational act.  Being rational means that you can’t be at the limit and you’re trying to cheat.

The euphoria when it’s over is intense, the tenderness is intense. The need to submit to this person grows.  I may not be a masochist but at times like this it’s hard to deny the label of pain slut.

This core of emotions when all layers have been stripped away is what I recognised in BibulousOne’s writing – it takes one to know one. 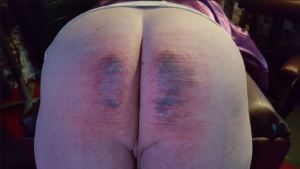 Melody after a session with the Mistress